With the new tag line released by the  Department of Tourism Experience the Philippines, Spot on Travel refocuses on the traditional feast days celebrated this summer. To piece together the great divides of our people and dialect, the woven interlink is a great story of culture, of pride and yet of many  regional diversities . This July fiesta issue covers the Pintados Festival in Tacloban and in Pampangga, we feature the Apung iru Festival

A cultural-religious celebration in Tacloban The Pintados Festival is a  based on the body-painting traditions of the ancient tattooed “pintados” warriors. In 1986, the Pintados Foundation, Inc. was formed by the people of Tacloban to organize this festival in honor of Sr. Santo Niño.Years later, it was merged with the Kasadyaan Festival which is always held on June 29.

‘Pintados’ literally means ‘Painted’ – the Pintados were an aggressive tribal people living and warring constantly in the Visayas. These ancient warriors used body paint as a tradition symbolizing their strength – the more tattoos, the more successful and revered they are in the the tribe. The festivities were initially formed in 1986 in honour of Santo Niño by the Pintados Foundation and eventually merging with the Kasadyaan festival forming the most colorfully vibrant unique festival in all of South East Asia, thus commemorating our ancestors and our great country. 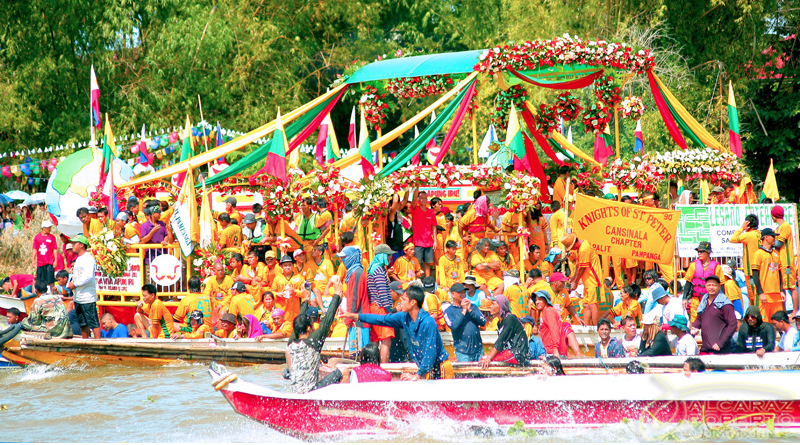 Held in Apalit, Pampanga, The Apung Iru Festival  is an ancient tradition dating back to the 19th century where a huge procession of devotees carry the holy image of St Peter back to Apalit Parish Church – St. Peter being the patron of the city. However this is no ordinary solemn procession as one may find in Europe this is one of celebration.

This truly unique holy procession is held in the Pampanga river as a boatcade of devotees chant hymns of celebration as this holy image is paraded through the river with flocks of people rushing to the banks from the swards to pay their respects in true Filipino fashion. Historically, ancestors did this to give bountiful blessings for fishermen and farmers for their crop – they did this with Spanish and Portuguese traders annually, thus leading to both bountiful crops as well as locals up till today being able to cook food with a Spanish and Portuguese twist.

The festivities last for two days – from June 28-30. These include the Blessings with holy water, the waving of flowers and the traditional dance called “Kuraldal” as the pagoda carrying the image of Apung Iru passes by are some of the traditional ways to welcome the town’s Patron with of course a mass finishing the festivities.

These  traditional annual celebrations  are unique in truly embracing  the heart of Filipino culture and To  experience the Philippines.

QRV for Spot on Travel

Filipina worker among first to receive COVID-19 vaccine in Canada